Millions more were donated in the Prop 8. battle over same-sex marriage in California than previously reported, campaign disclosures show: 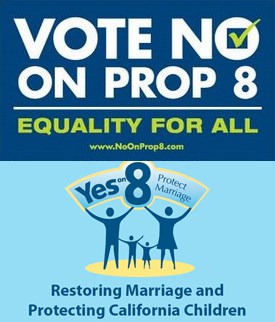 “The new filings, which cover the weeks immediately before and after the Nov. 4 election, show that elected officials, businesses, churches and individuals poured millions more into the contest than previously reported. The final tallies show that opponents of Proposition 8 raised $43.3 million in 2008 and had a little more than $730,000 left on hand at year’s end. The measure’s sponsors raised $39.9 million and had $983,000 left over. Even before the late contributions were added in, the race already had become the most expensive ballot measure on a social issue in the nation’s history…The Democratic State Central Committee donated $150,000 and spent another $202,647 on mailers and other in-kind contributions. San Francisco Mayor Gavin Newsom funneled $20,000 from the committee he has established to explore running for governor next year to the No on 8 campaign. House Speaker Nancy Pelosi gave the same amount from her re-election account. The Church of Jesus Christ of Latter-day Saints, which has been criticized for strongly encouraging its members to support Proposition 8, for the first time assigned a dollar value of nearly $190,000 to its role in getting the initiative passed. More than half, or $97,000, went to the time that staff members of the Utah-based Mormon Church devoted to the Yes on 8 campaign, according to the church’s report. Another $21,000 was for the use of church buildings and equipment during the campaign. Most of the rest went to airline tickets, hotels and meals for church officials. The church said it did not make any cash donations supporting the measure.”