Approximately 2,000 people rallied at Hawaii's state capitol yesterday in opposition to a civil union bill that is making its way through the legislature. 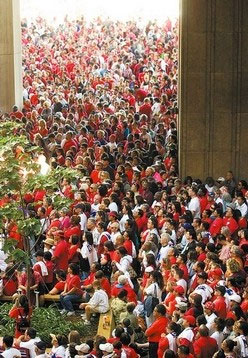 "House Bill 444 passed the House earlier this month. The measure isin jeopardy of dying in the Senate Judiciary and Government OperationsCommittee with potential swing vote Sen. Robert Bunda (D-22nd NorthShore, Wahiawa) announcing that he would vote against it. However,state Senate President Colleen Hanabusa, D-21st (Nanakuli, Makaha) hassaid she would consider recalling the bill from committee, withagreement from committee chairman state Sen. Brian Taniguchi D-10th(Manoa, McCully), to bring the bill to the full Senate. Protesterssaid yesterday that they wanted to send Hanabusa and other legislatorsa clear cautionary message before any such decision is made. 'Ithink this is awesome,' said former state Rep. Dennis Arakaki, whoheads the Hawai'i Family Forum, a nonprofit group that opposes same-sexmarriage, civil unions and other legal recognition of same-sex couples.The forum worked with a broad network of local churches to organize thedemonstration…Demonstrators clad in bright red filled the first level of the Rotunda and spilled out across the surrounding lawns. Sometook up positions around the block, holding signs that read 'No CivilUnion,' 'Destroy the Core of 444,' 'We Sed No Already' and 'Turn toJesus or Burn in Hell.' Most packed tight around a stage set upin the middle of the Rotunda, where leaders from several differentfaiths exhorted listeners to call their legislators and submittestimony in opposition to the bill."

The bill is expected to be taken up tomorrow by the Senate Judiciary and Government Operations Committee:

"State Sen. Robert Bunda, who was the potential swing vote on theSenate Judiciary and Government Operations Committee, said he plans tovote against the bill that would give same-sex partners the same rightsas married couples under state law. The bill, which passed theHouse earlier this month, could die in the Senate committee withoutBunda's support. But Senate leaders, who favor the bill, may take therare step of circumventing the committee to bring the bill to the fullSenate."

Watch a brief clip of Sunday's protest,an interview with Hawaii state senator Sam Slom who is against the bill, and a short video in favor of Hawaii's civil union bill, AFTER THE JUMP…