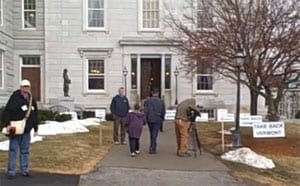 "The House and Senate Judiciary committees…heard from about 70Vermonters, although about 200 signed up to speak. Senate JudiciaryCommittee Chairman Richard Sears, D-Bennington, said there were 115 forsame-sex marriage and 85 against on the list. The Senate committee is expected to vote out a bill allowing same-sexmarriage by week’s end, putting it before the full Senate next week."

Hearings began at the state capitol on Monday. Meanwhile, the anti-gay group National Organization for Marriage has begun airing "Don't Mess with Marriage" ads across northern New England. Listen to their hideous misleading ads on the NOM site. Friday, a group of more than 300 lawyers representing approximately 15% of the state Bar held a news conference (pictured) in support of legalizing same-sex marriage in the state. Earlier this month, lawmakers expressed confidence that the bill would pass this session.

A WPTZ news report on the hearings, and a citizen report, AFTER THE JUMP…