William McInerney, the father of Brandon McInerney,
the teen accused in Lawrence King's murder last February, was found dead at his home this morning: 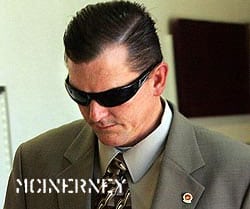 "Bill McInerney, 45, was found shortly before 8 a.m. in the living room
of his Silver Strand home by a friend, said James Baroni, Ventura
County’s chief deputy medical examiner. The friend was supposed to
drive him to a court hearing in his son’s murder trial, Baroni said…Brandon McInerney is being tried as an adult and was scheduled to
begin a preliminary hearing today to determine if there is enough
evidence to move to a trial, officials said. That hearing was postponed. Baroni said there was no sign of foul play or suicide at the
father’s home. An autopsy is underway, and a cause of death should be
available later today, the deputy medical examiner said. 'Nothing at the scene was a red flag,' he said."

The elder McInerney was facing felony charges of his own for criminal threats and possession of a weapon with regard to a prior domestic violence conviction.

UPDATE: "Michael Tellez, a Ventura County deputy medical
examiner, said an autopsy revealed that McInerney sustained an
accidental head injury from a fall. Based on the scene and the man's
history, Tellez said, alcohol was a significant factor. Toxicology tests will determine blood alcohol content and whether other substances were in his blood, Tellez said."