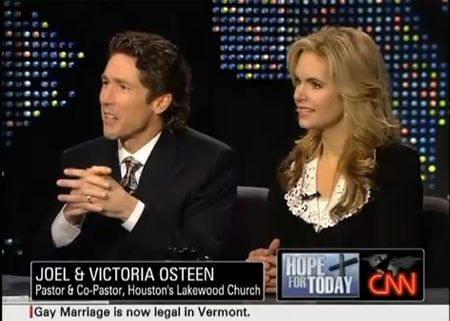 It must be religious bigotry week on Larry King Live. Monday night was Pastor Rick Warren, and last night megachurch pastor Joel Osteen and his wife Victoria. King asked Osteen about the recent victories in the marriage equality battle. Osteen has a tough time getting his head around it.

They honestly don't want to see homosexuality as anything less than a perversion. They're just well-coiffed and more polite versions of Michael Savage, essentially.

Clip and transcript, AFTER THE JUMP…

KING: Iowa Supreme Court just allowed same-sex marriage, making them thethird state; Massachusetts, Iowa and Hawaii. The general forecast isthat's coming. Other people are now saying, why not makemarriage a religious institution, and have the state bonding that thenon-marriage state issue. So we can have two kinds of getting together.

J. OSTEEN: I'm not sure I understand —

KING: In other words, if you want to be married and you're bothreligious, go to your church. If you want to be bonded together and youdon't want to call it marriage, go on down to the civil servant office.

KING: The state will not marry you.

J. OSTEEN: Sure. I guess my thing, Larry, is I just like the definitionof marriage to be between a man and a woman. So it sounds like you'resaying something different.

KING: Well, it still would, except the state wouldn't perform it.

KING: You could perform it.

KING: By the state.

KING: If the religious institution — I'm just throwing this out.

KING: Do you think, though, the other side is coming, that eventuallymany more states are going to allow same sex marriage?

J.OSTEEN: You know, I don't know where it's all going, but again, I just– it's my desire that we keep the family unit, the basis of oursociety — I'd love to see it stay between a male and a female, notknocking anybody else. But I'm not sure where it's all going.

KING: If this continues, do you think it will harm things? Supposingthere were more states that had it. What would be the harm?

V.OSTEEN: Again, you know what? We really want to see marriage between aman and a woman. There is going to be people who get together and haverelationships and have what they call their families. But I just thinkmarriage should be sanctified by the church. It should be between a manand a woman. But yeah, I mean they're doing it today.

KING:The proposal is if that should happen, sanctified by the church, thestate shouldn't be in the marriage business. That was the otherproposal. Why should the state be — just throwing it out there.

J. OSTEEN: I don't know if I'm 100 percent clear on it all. But Iguess, Larry, we come back to that — will it undermine the basis ofsociety? I don't know. I think that — I know God's best is for a maleand a female to have a marriage and raise their family. It doesn'talways happen, but I believe that's much better.

KING: Should a gay couple be allowed to adopt?

J. OSTEEN: Well, I think that again, it's best for a male and a female.I can't say — I'm not saying that gay people aren't good people. And —

J. OSTEEN. Yeah, exactly. But again, I like to shoot for God's best,and that is a father and a mother in the home. It doesn't alwayshappen. I know a lot of people raised by single parents. And you knowwhat? We bless them and pray for them as well. but I think God's bestis a male and female.