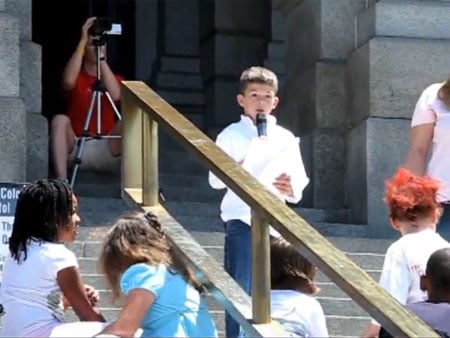 Ethan McNAmee, a third-grader at Montclair Elementary School in Denver, organized a rally for marriage equality and delivered a speech at the Colorado State Capitol on Saturday:

"He was concerned about the issue after hearing about anti-gay remarkson the playground and then learning about a same sex couple in hisneighborhood that couldn't get married. 'Everybody is different in a good way,' he said. Ethan believes that if two people love each other that is the only issue to be considered.Ethan took it upon himself to arrange the rally and line up the guestspeakers. He admitted it was more work then he thought it would be, butadds it was fun."

McNamee's permit was filed under the name of his school teacher Kyle Kimmal, because he's too young to apply for one himself.

According to Denver's ABC7, the conservatives are already on the attack, accusing adults of manipulation.

Watch Ethan's speech, AFTER THE JUMP…