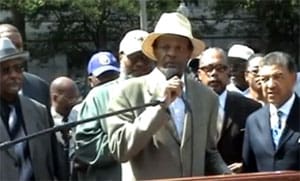 "The measure, approved by a vote 12 to 1, now goes to Mayor Arian M. Fenty (D), a supporter of gay marriage. If Fenty signs it, the District will put the same-sex marriage issuedirectly before the Congress. Under Home Rule, the District's laws aresubject to a 30-day congressional review period. After the vote, a large crowd of opponents, led by local ministers,began yelling 'Get them off the council!' referring to the members whosupported the measure. The Council initially voted unanimously, without debate, to approve thebill. But Council member Marion Barry (D-Ward 8) apparently did notrealize what he was voting on. A few minutes after the initial vote,Barry made a motion to reconsider the vote. He then voted against the proposal. Before the final vote, Barrynoted he has been a longtime supporter of gay rights but said hedecided to stand with the 'ministers who stand on the moral compass ofGod.'"

Added Barry: "It has been a very agonizing and difficult decision. I feel comfortable with this position because I know wheremy heart is. . . . I am representing my constituents. I have thoughtabout it lot and I have been a friend of [the gay] community and willcontinue to be a friend of this community."

Barry (pictured), a 4x married, ex-con, tax-evading, crack addict, declared himself a moral leader at a rally against the same-sex union measure at a rally last week organized by Reverend Harry Jackson.

Watch that video again, AFTER THE JUMP…