In response to a few incidents of anti-gay bullying at Nettelhorst Elementary School in Chicago, parents and administrators have taken action: 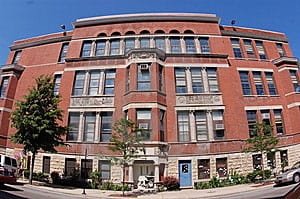 "In May, [Lesbian parent Marcia] Festen and other parents collected hundreds of pieces of
fabric — strips in the rainbow colors of the gay pride flag — and
each Nettelhorst student tied a ribbon to the school's fence, creating
a beautiful rainbow mosaic. A sign accompanies it, saying: 'Each
Nettelhorst student has tied a piece of fabric to the fence as a
tangible sign of his or her personal intention to create a better
world.' They have also recruited families, mainly straight ones, to march in
the Pride Parade later this month. Nettelhorst will be the only public
school marching. And school administrators, who supported these efforts, agreed to
start a parent diversity committee. They'll be tasked with finding ways
to reflect the school's diversity in the curriculum and in the images
in the school building. Their larger goals are ambitious but doable: to eliminate the stigma
attached to kids from same-sex families, to normalize those families so
there's less to tease about. Their aim is a school culture in which
everyone feels offended by teasing, not just the victims."

The school has at least five students with same-sex parents.

"A few Nettelhorst parents balked at the parade and the fence
project, and a group not affiliated with the school posted a hateful
blog item. But the vast majority of Nettelhorst parents have embraced this
effort. Straight parents helped with the fence project, signed up for
the parade, volunteered for the diversity committee or simply offered
an encouraging word. For the same-sex parents, this has been the most meaningful part."