Keith (left) and Al Toney, one of the same-sex couples involved in a legal challenge to DOMA that was announced in March, will be able to share the same surname on their passports, they were told by the Justice Department on June 15: 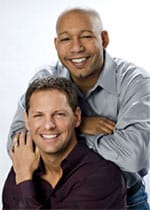 "A gay married couple, Al and Keith
Toney, joined the group Gay and Lesbian Advocates and Defenders in
challenging the federal Defense of Marriage Act, which was passed
during the Clinton administration, in federal court in Boston. One
issue the couple and GLAD raised was the State Department’s refusal to
allow Keith Toney – his name before marriage was Keith Fitzpatrick – to
seek a new passport under his spouse’s surname. In
a letter dated June 15, the US Justice Department notified GLAD and the
Toneys that the prohibition has been stricken from federal rules. Mary L. Bonauto, lead counsel for GLAD, welcomed the shift by the
current administration, but urged a more sweeping rejection of the
federal law."

Keith's former surname was Fitzpatrick but he decided to change it to Toney because of Al's daughter, in order that the family share the same name.

Previous Post: « The Department of Justice DOMA Brief – Another Look
Next Post: Anderson Cooper Wonders: Does Richard Simmons Ever Change? »