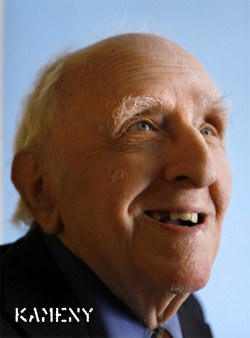 Read the full letter at the Blade.

In February, Kameny's home in Washington D.C. was declared an historic landmark:

"…not because of its gabled roof or side-hall plan, but because, for 13
fiery years, it was the epicenter of the gay rights movement in the
nation's capital."

In 2007, Kameny donated more than 70,000 papers related to gay rights to the Library of Congress, inspiring a hate campaign by wingnuts. A few of his artifacts are now in the Smithsonian as well:

"[Protest signs], plus three campaign buttons, are now in the same case
as Joe Louis's boxing gloves, near the glass closet that holds Jackie
Kennedy's inaugural gown and in the same shrinelike exhibit…that also
has Thomas Jefferson's writing desk and the ruby-red slippers that
Dorothy wore on her way to meet the Wizard."