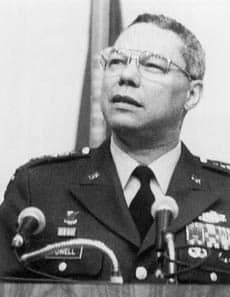 Colin Powell—who helped craft Don't Ask, Don't Tell in 1993 (picture from that year) after thwarting President Bill Clinton in his efforts to open the military to out gay soldiers—said on CNN's State of the Union today that the policy should be reviewed, but would not say it should be repealed.

"The policy and the law that came about in 1993 I think was correct for the time. Sixteen years have now gone by, and I think a lot has changed with respect to attitudes within our country. And therefore, I think this is a policy and a law that should be reviewed."
He also seemed to dispute the notion (as interpreted from President Obama's recent remarks) that the policy exists only because of a generation gap:
"It is not just a matter of old generals who, you know, are just too high-bound. There are lots of complicated issues with respect to this, and I think all of those issues should be illuminated. And I hope that the Joint Chiefs of Staff and the commanders working with the Secretary of Defense will give this the greatest consideration and make their recommendation to the president and to the Congress."