In interviews with CNN and Good Morning America, Sarah Palin said she didn't think her resignation would be "such a darn big deal."

It bears mentioning that she would only do the interviews if they were filmed while she was fishing, an obvious choice to show herself as a man of the people who just happens to be a woman. (In the CNN clip she rather bluntly calls the setting "unpretentious." Telling us you're not being pretentious is not the best way to be perceived as unpretentious.)
Palin pointed to "frivolous lawsuits," "absolutely ridiculous ethics charges" and "a new political bloodsport" making it impossible for her to lead her state. The Clintons and Obamas might have something to say about the relative thickness of her skin.
Her decision, she claims, was not made lightly, but was "a long and deliberative internal process." 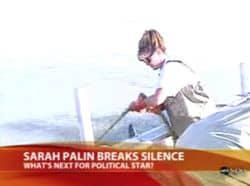 "I'm certainly not a quitter, I'm a fighter," she said. But she acknowledges that politically speaking, "If I die, I die. So be it."
Asked whether she's out of politics for good, she allows, "I can't see me being totally out of public service because that is within me, that is the way I'm wired…All options are gonna keep on continuing to be on the table as they have been for me my entire life. I'm not gonna close any door that may be open for me out there. So all options are on the table."
The more she talks, two things come to mind: First, it would seem that both she and Governor Mark Sanford (who was just censured)  might want to consider that silence is golden. Second, those betting on the two most likely explanations for her departure—impending scandal or seriously misguided instincts on how to launch a presidential bid—should consider pulling some of their money from the first scenario and betting it on the second.
After the jump, blogger and Palin critic Shannyn Moore on Countdown regarding Palin's threat to sue over rumors of a scandal…