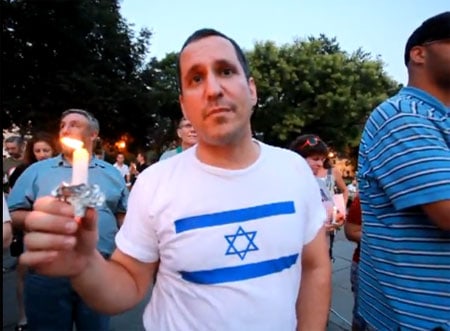 The Washington D.C. community held a vigil last night at Dupont Circle to express its solidarity with the victims of the shooting at the gay community center in Tel Aviv that took place over the weekend: 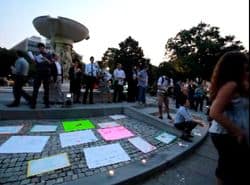 "The protesters carried banners that read 'homophobiais not part of the Torah,' 'Jewish, out & proud,' 'prejudiceagainst one is prejudice against all.' They lit memory candles and sangsongs in Hebrew. Gay rabbis addressed the crowd and shared theirexperience of being homosexual and religious. Josh Rosenthal, a gay Jewish activist who organized the rally, said the response from Jewish institutions was immediate. 'I just hope that this kind of energy makes it toIsrael,' he said. 'It was particularly harmful that a Jew is shootinganother Jews in Israel for the simple reason that they are gay.' Andy Marcus, a Washington lawyer, was wearing a T-shirt bearing abig Star of David. He said that he was devastated by the news of theshooting." 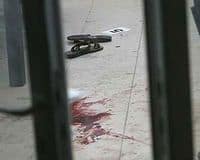 Casualties from the Saturday shooting remain at two, with 15 injured: "Four victims of the attack still remain in IchilovHospital in Tel Aviv, two of whom are in intensive care. One of thefour is listed in serious condition, two in moderate condition, and oneis suffering light injuries." Police are still saying it is too early to label it a hate crime. "At a meeting Monday assessing the status of the case, [the police commissioner] cautioned against implicating segments of the society 'regarding suspicions and possible directions [of the investigation].'"

Watch scenes from the vigil, AFTER THE JUMP…