John Piper, pastor at Bethlehem Baptist Church in Minneapolis, wrote a blog post today interpreting a recent tornado in Minneapolis as a sign that Jesus Christ, who "controls the wind, including all tornados," sent down a twister because the Lutheran Church is considering lifting restrictions on gay clergy at a convention there this week. 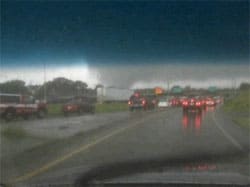 The tornado damaged portions of the convention center where the Lutherans are meeting as well as the steeple of the Central Lutheran Church.

Concludes Piper: "The tornado in Minneapolis was a gentle but firm warning to the ELCA
and all of us: Turn from the approval of sin. Turn from the promotion
of behaviors that lead to destruction. Reaffirm the great Lutheran
heritage of allegiance to the truth and authority of Scripture. Turn
back from distorting the grace of God into sensuality. Rejoice in the
pardon of the cross of Christ and its power to transform left and right
wing sinners." 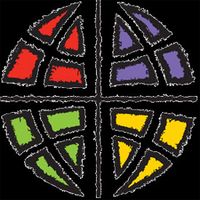 Shortly after the storm hit, the 1,014 Lutherans passed a social statement by a one vote margin:

"The social statement is a long document that essentially says that
the church will agree to disagree on the issue of same-sex
relationships, but will neither punish congregations that decide to
bless such relationships nor force congregations that reject blessing
same-sex couples. 'This church also acknowledges that consensus does not exist
concerning how to regard same-gender committed relationships, even
after many years of thoughtful, respectful, and faithful study and
conversation,' the statement says in part. “'We do not have agreement on
whether this church should honor these relationships, uplift, shelter
and protect them, or on precisely how it is appropriate to do so.' But LGBT Lutherans are hailing the vote, which came in at 676 to 338, exactly the 66.67 percent margin needed."