A Research 2000/Kos poll of 600 likely Maine voters conducted between September 14-16 reveals that if the election were held today, Maine would lose marriage equality.

The relevant questions, via DailyKos: 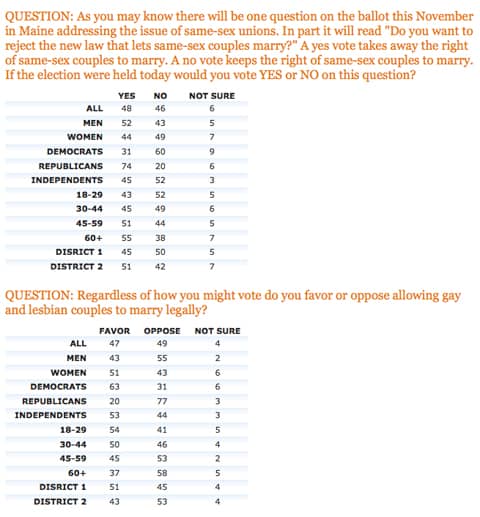 According to the pollsters: "Those interviewed were selected by the random variation of the last four digits of telephone numbers. A cross-section of exchanges was utilized in order to ensure an accurate reflection of the state. Quotas were assigned to reflect the voter registration of distribution by county. The margin for error, according to standards customarily used by statisticians, is no more than plus or minus 4% percentage points. This means that there is a 95 percent probability that the 'true' figure would fall within that range if the entire population were sampled. The margin for error is higher for any subgroup, such as for gender or party affiliation."

More questions about the state of Maine and the nation here.

Previous Post: « Charlize Theron: I Won’t Marry Until Gay People Can Marry
Next Post: Kanye West: I’m So Sure I’m Not Gay I’ll Stand Next to People Who Are »