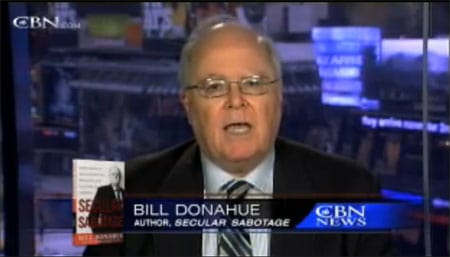 Bill Donohue, of the Catholic League (famously described by Kathy Griffin as one man in a room with a computer) appeared on The 700 Club yesterday to talk with Pat Robertson about his new book, Secular Sabotage, and denied that the Catholic Church has a pedophile problem. Donohue claimed that it's not a pedophile problem, it's a homosexual problem.

Donohue also rants about attacks on the Catholic Church by governments requiring them to allow gays to adopt children.

Watch AFTER THE JUMP…

Previous Post: « John Mayer: I Went to a Gay Bar, But I Did Not Kiss a Dude
Next Post: Daily Mail Writer Pens Homophobic Screed About Stephen Gately »