A party held by the Capital Crossroads Gay Rodeo Association in Wilton, California, is making headlines in Sacramento after a man who lives nearby the rented lot where it was held videotaped it and said he was upset that his children could possibly see what was going on. 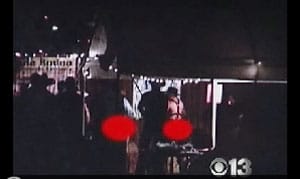 "The home video shows a group called 'The Capitol Crossroads Gay Rodeo Association' at play. Dance contestants' names were called out as men's bare buns and frontal regions are exposed.

Monty Stanley shot the video. He says he could see all the nudity from his home across the street. 'They were dancing under the stars,' said Stanley. 'You can't have man on man, woman on woman, men on women, you can't subject these children to looking at that kind of stuff.'

Stanley says the night of the dance his kids had neighborhood friends over for the night. 'I was sickened by seeing men on public display there…In clear view of children,' explained Stanley."

A video report on the party, which was held with a legal permit, is here.