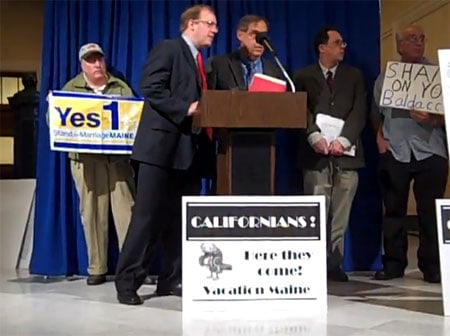 And I thought extremist, irrational bigots were the elephant in the room. Silly me.

From yesterday's hate group press conference at the Maine State House at which Paul Madore, Brian Camenker of MassResistance (a known hate group), and LaBarbera inserted themselves in the Maine marriage battle.

Bangor Daily News reports that these extremists are too anti-gay for the anti-gays in Maine:

"'We disavow anything said today as being in any way connected to theStand for Marriage Maine campaign,' said spokesman Scott Fish. 'Whatever was said today was simply the words of the people speaking atthe press conference.'"

"Peter LaBarbera, president of Americans for Truth, described theNational Gay and Lesbian Task Force — one of the nation’s most activegay rights groups — as having 'one of the most radical sexual agendasever conceived.' He also sought to link the group to efforts tolegalize public sex and prostitution, claiming this is part of a largeragenda. 'Very clearly there is already a very aggressive agenda in theschools,' said LaBarbera when discussing a news report of a teacheranswering a student’s question about her relationship with her partner. 'Homosexual so-called marriage only fuels that agenda. Itinstitutionalizes it so that there can be no difference in how thisaber-rant form of ‘marriage’ is compared to the real thing.'”

Said Jesse Connolly of the "No on 1" campaign: “If radical means loving the person you’ve been with for many yearsand trying to provide for that family and for your kids with thatcommitted partner, then I see nothing wrong with that."