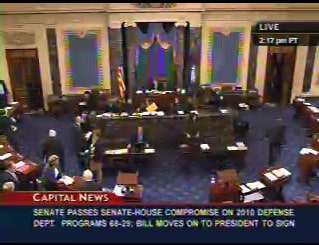 The Senate today passed a historic expansion of federal hate crimes statutes to include sexual orientation. The chamber voted to approve the Local Law Enforcement Hate Crimes Prevention Act (also known as the Matthew Shepard Act) by a vote of 68-29, sending the first civil rights legislation protecting gays and lesbians to President Obama for his signature. The bill was attached to a Defense Department appropriations bill.

WaPo: "The legislation, which was attached to the conference report for thebill outlining the Pentagon's budget, marks the culmination of ayears-long fight by civil-rights groups to codify the expandedprotections. The law broadens the current definition of federal hatecrimes — which covers attacks motivated by race, color, religion ornational origin — to include those based on gender, sexualorientation, gender identity or disability. It would also create a newfederal crime to cover attacks against U.S. military personnel becauseof their service."

Earlier in the day the chamber took a cloture vote (to end debate and filibuster) of 64-35 to move the bill forward.

The Matthew Shepard Foundation released a statement regarding passage of this historic bill. Read it, AFTER THE JUMP…

Today, the United States Senate took an historic step toward ensuring justice for the victims of hate crimes targeted for violence due to their sexual orientation, gender, gender identity or disability.

"Dennis and I are extremely proud of the Senate for once again passing this historic measure of protection for victims of these brutal crimes,” said Judy Shepard, president of the Matthew Shepard Foundation Board. “Knowing that the president will sign it, unlike his predecessor, has made all the hard work this year to pass it worthwhile. Hate crimes continue to affect far too many Americans who are simply trying to live their lives honestly, and they need to know that their government will protect them from violence, and provide appropriate justice for victims and their families."

By voting overwhelmingly to extend to these often-targeted Americans our nation’s decades-old bias crime legislation, senators sent the message that hate crimes will not go unpunished, and local governments and law enforcement agencies will not run out of financial resources to provide justice to these victims and their loved ones.

The Matthew Shepard and James Byrd Hate Crimes Prevention Act was attached earlier this year to the annual Defense Department spending bill, and Thursday’s 68-29 Senate vote to approve the final House-Senate compromise on the defense bill now sends this important law enforcement provision to President Obama, who has vowed to sign it.

Under the legislation, federal prosecutors could step in to try violent hate-crime cases if local authorities cannot or will not secure an appropriate conviction. It also opens up federal funding for law enforcement to handle the typically high cost of investigation and judicial proceedings in such cases, and would make grants available for training and prevention programs at the local level.

The act is named to honor Matthew Shepard as well as James Byrd, an African-American resident of Texas brutally dragged to death in 1998 in a notorious hate crime. Matthew’s parents Dennis and Judy Shepard have campaigned for the legislation’s passage for more than a decade since their son’s murder in Laramie, Wyoming, in 1998 in an anti-gay hate crime.

The Matthew Shepard Foundation applauds Congress and President Obama for their steady and successful efforts throughout 2009 to bring the legislation to this point. We eagerly anticipate its final enactment and wish to thank the countless organizations and individuals who have worked tirelessly for its passage.