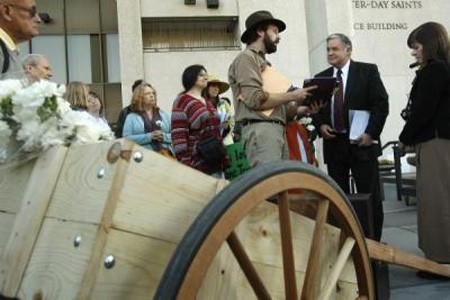 Members of the Foundation for Reconciliation, a gay Mormon group, delivered more than 2,000 petition signatures by handcart to the headquarters of the Church of Latter Day Saints in Salt Lake City on Wednesday, marking the one-year anniversary of Proposition 8 in California. 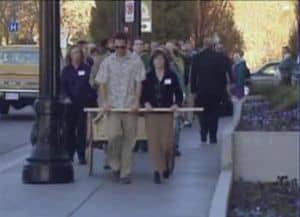 "About two dozen peoplejoined in the two-hour, downhill walk from This is the Place Monumentto City Creek Park for a short rally, where attendance grew to about40. The group then delivered a trunk, filled with the signatures andother materials, to Mark Burton, a member of the church's publicaffairs staff, outside the Church Office Building downtown. Participants, singing the LDS hymn "Love One Another," droppedwhite carnations on the trunk to pay tribute to gay Mormons who havecommitted suicide. LDS officials denied a request that a generalauthority meet with the group — which last month scored a meeting withGov. Gary Herbert — to accept the petition."

Watch a report on the cart's journey and its arrival at LDS headquarters, AFTER THE JUMP…