Given the fact that Rhode Island Governor Donald Carcieri is solidly in with NOM and giving speeches about "traditional  marriage" to the Massachusetts Family Institute, this thaw is encouraging. 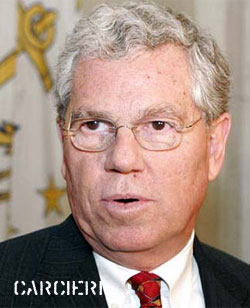 As I posted earlier this week, Carcieri vetoed a bill that would have allowed gays and lesbians to make funeral arrangements for their domestic partners, saying, "This bill represents a disturbing trend over the past few years of
the incremental erosion of the principles surrounding traditional
marriage, which is not the preferred way to approach this issue. If the
General Assembly believes it would like to address the issue
of domestic partnerships, it should place the issue on the ballot and
let the people of the state of Rhode Island decide.''

Yesterday, gay groups met with Carcieri, and emerged from the meeting saying he better understood the difficulties gays face when it comes to rights:

"'Maybe [an 'everything but marriage' domestic partner law is]  something we should consider,' said Carcieri, after meeting privately Thursday for more than an hour in his office with a half-dozen members of Queer Action of Rhode Island, a group that in the immediate aftermath of his veto had labeled him 'a bigot.'

Among those attending was Mark Goldberg, the Providence East Sider whose five-week battle to claim the body of his partner of 17 years from the state morgue, had sparked the vetoed legislation.

Citing as a possible model the 'everything but marriage' referendum that won approval in the state of Washington earlier this month, Carcieri said: 'I don’t know enough, yet. All I am saying is I understand the circumstances. I understand the difficulties' that can arise for same-sex couples and others — such as widows living with widowers, and widows with other widows — outside the legal framework of a traditional marriage. 'Let’s see if we can find a way to solve that without discreet [pieces] of legislation every time something comes up. I just don’t think that is the right way to deal with it,' he said."