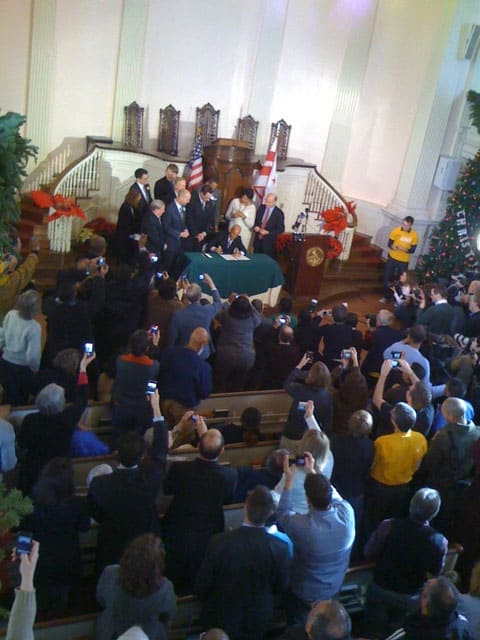 "In a raucous signing ceremony at a northwest Washington church, Mayor Fenty officially legalized same-sex marriage in the District, distributing ceremonial pens among the Council members standing behind him. The law now will go through a period of review consisting of 30 days in which Congress is in session. If the law passes that hurdle — as is widely expected — the first gay marriages in the District could take in late winter or early spring of 2010.The ceremony at All Souls Unitarian Church — one of many in the city that supported the legislation — opened with comments by Fenty, Council chairman Vincent Gray, and Council members Phil Mendelson, David Catania and Jim Graham.In his opening remarks, Fenty recalled that when his own parents were married, many states would have refused to recognize their bonds. Fenty's father is black, while his mother is white. 'Today an era of struggle ends for thousands of D.C. residents,' he said. 'Our city is taking a leap forward.'"

Video of the bill-signing, AFTER THE JUMP…