A document from the Church of Latter Day Saints to the Proposition 8 campaign was revealed at the trial today, and contained this instructive: 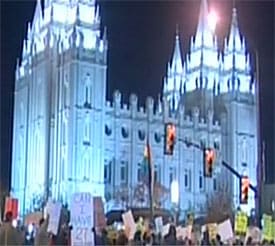 With respect to Prop. 8 campaign, key talking points will come from
campaign, but cautious, strategic, not to take the lead so as to
provide plausible deniability or respectable distance so as not to show
that church is directly involved.

Rosen called the afternoon "explosive" as the attorneys battled over what documents could be revealed as evidence of the coordinated efforts between Prop 8 campaign and Catholic, LDS, and Evangelical churches.

It elicited this statement from Judge Walker: "Not to make light of this, but the reason people want to produce documents is that they are revealing."