Michelangelo Signorile takes GLAAD to task in a new Advocate column with the Adam Lambert controversy at its centerpiece: 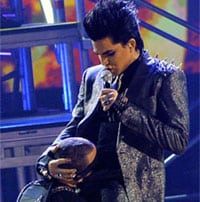 "At the heart of the controversy is a simple fact: GLAAD solicits money
from networks and entertainment companies and then hands them awards
for what the organization deems positive media representation of the
LGBT community. (In 2009, ABC actually led rival networks with its
number of nominees.) Media companies receiving the awards—many of which
often engage in or perpetuate the very bias and defamation that GLAAD
crusades against—sponsor the celebrity-strewn benefits and underwrite
the performances in return for branding opportunities and choice
tables. This fund-raising dynamic developed over time and, according to
former staffers, accounts for a large percentage of the group’s
money—sort of like a drug habit it just can’t shake. And also like a
drug habit, this setup enormously compromises the group: What kind of
effective watchdog takes money from the industry it polices? Imagine
the ineffectiveness of a congressional watchdog group taking money from
House and Senate members."

According to Signorile, GLAAD President Jarrett Barrios says the group "keeps its finances separate from the advocacy work that it does" though it's not explained how that might be possible.