In the new issue of Entertainment Weekly, Simon Cowell and Ellen DeGeneres discuss Ellen's upcoming judgeship at the singing competition, and address the gay banter between Simon and Ryan that has been criticized in the past: 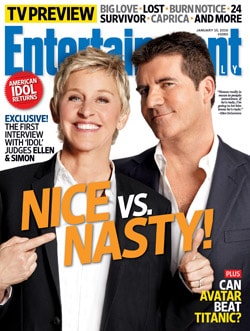 DeGeneres: Simon, I guess this is as good a time as any to tell you – I’m gay.

Cowell: Are you serious? No one told me that. Let me tell you something: We are the least racist, homophobic show in the world. What we do have, thank God, is a sense of humor. I hate political correctness. I wouldn’t go into any show saying anything is off-limits. If we have to abide by a ton of rules, we might as well call it a day now.

EW: Is that cool with you, Ellen?

DeGeneres: Well, I don’t go by that rule, where there’s no political correctness at all. If we lived in a world where there was no such thing as racism or homophobia, then obviously there would be no off-limits. Unfortunately, there are people in this world that don’t like other people, and that was one of the issues that was brought up about Adam Lambert. So I’m sensitive to it just because I’ve experienced that kind of discrimination. At the same time, the stuff that Simon and Ryan do – none of that has ever been offensive to me. I’m more offended by people who make jokes about something sounding like an animal that’s been caught in a lawn mower or whatever. Because there are sick people out there that would go, “What’s that sound like?”