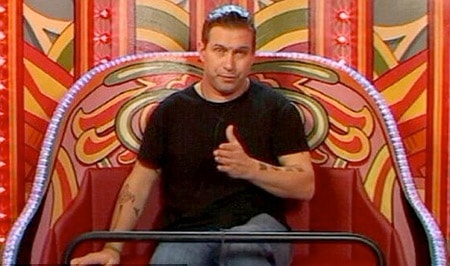 Stephen Baldwin, who recently captured the attention of Brits by joining Celebrity Big Brother in the UK (along with Ivana Trump, Heidi Fleiss, and Sisqo) in order to pay off debts (reportedly over $2 million to the IRS) is still preaching against homosexuality. From a profile in The Guardian: 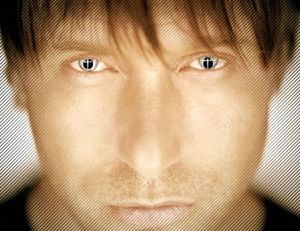 But then, the day after, we speak again on the phone and I ask him what he'd do if one of his girls came out as a lesbian and the other became a stripper. "Jesus or no Jesus, if my kid started working in a strip club, I'd beat her ass," he hoots. "Now, the other question is interesting and culturally relevant. I have two or three very dear friends who are homosexual and they know I'm born again and we have an understanding that we're just not going there…"

I'm not surprised. For the next 20 minutes, we have an intense discussion – argument, really – during which Stephen reveals that he's all for gay men who, through their faith, reject their homosexuality and get married: "To turn away from that lifestyle is astonishing." Yes, Stephen, it is. And he's definitely not for gay marriage.

What about civil partnerships, I ask wearily.

"I believe that the family unit has fundamentally been the most positive thing for society and I don't believe that any minority has the right to create changes that impact on the majority. That's really the only issue for me."

Baldwin, who became a born-again Christian following 9/11, which he says was a sign from the Lord, has expressed his disapproval of same-sex marriage in the past, telling Howard Stern, "I don’t believe that gay marriage is in line with God’s Word, which is found in the Bible. So, what I think doesn’t matter; what I believe is what’s in the Bible and the Bible says that gay marriage is not acceptable."

Baldwin also told MSNBC he doesn't believe homosexuality is normal and therefore it should be kept out of the public education system.

Baldwin's eviction and a short movie uploaded recently by Boy George in which George goads Baldwin to say, "I love Boy George, and he's gay," AFTER THE JUMP…