In mid-January I posted about Daniel Hauff, a gay man who was attacked on the Chicago "L" train after he tried to help a stranger his attackers had targeted. 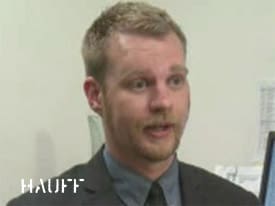 Daniel Hauff, of Rogers Park, came to the youth's aid, at which point Little allegedly began directing anti-gay slurs at Hauff and pushed him. Eder and McAndrew, who had been watching before, allegedly joined in the assault, calling Hauff a 'stupid fa***t,' and all three men began punching and bloodying Hauff's face in front of train passengers, according to a release from Hauff's attorney."

Hauff said he escaped by wiping some of his blood on the attackers and telling them he was HIV-positive.

Yesterday, the misdemeanor batteries against the three men involved in the attack were dropped in court, but they got a bit of a surprise as they were leaving the courtroom:

"As the three men left the courtroom, they were immediately re-arrested and charged with felony hate crimes as a result of a review of the case by the State's Attorney and the Chicago Police Department."