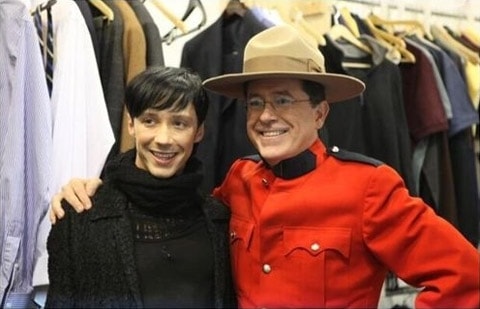 Johnny Weir met the flamboyant Stephen Colbert over the weekend.

Meanwhile, more sports commentators are the subject of complaints regarding their treatment of Johnny Weir, this time in Quebec, from veteran sportscasters Claude Mailhot and Alain Goldberg.

Said Mailhot: "This may not be politically correct. But do you think he lost points due to his costume and his body language?"

Replied Goldberg: "They'll think all the boys who skate will end up like him. It sets a bad example."

The exchange wasn't the first time they had made questionable comments regarding Weir: "In earlier RDS coverage of Weir, Goldberg and Mailhot also brought up South African runner Caster Semenya, who was forced to undergo gender testing following her 2009 win at the world track and field championships in Germany. 'We should make him (Weir) pass a gender test at this point,' Goldberg said and Mailhot then jokingly suggested Weir should compete in the women's competition."

The Quebec council of gays and lesbians has demanded a public apology.

Meanwhile, Weir gave an interview to  Eddie McGuire, Australian newscaster who suggested Weir "didn't leave anything in the closet" when performing.

Weir forgave McGuire: "For me, I take everything as a game. I am very laid-back as far as that goes. I like to poke fun at people, there's no harm with that, it's all in good fun."