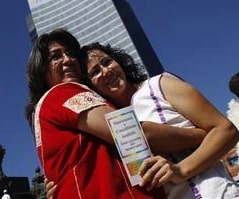 This is going to be a significant week in marriage equality. Earlier today we saw the first gay and lesbian couples in Washington, DC receive their marriage licenses. Tomorrow comes an arguably bigger milestone when both marriage and adoption by same-sex couples become legal in Mexico City, the capital of a very religious and very conservative country. But gays are already worried that their rights might be taken away from them by the hands of the country's politicians. The Washington Post reports:

After
abortion was legalized, she noted, states altered their constitutions
to say life begins at conception. Governors affiliated with PAN have
promised to challenge same-sex marriage.

"Many activists in gay groups fear there will be a backlash," Pérez said.

Undoubtedly. Especially in a country whose president has gone on record to say that "the constitution of the republic speaks explicitly of marriage between a man and a woman" and the city's Cardinal has declared same-sex marriage as a "'perverse' (that) measure would inflict psychological
damage on 'innocent children.'"