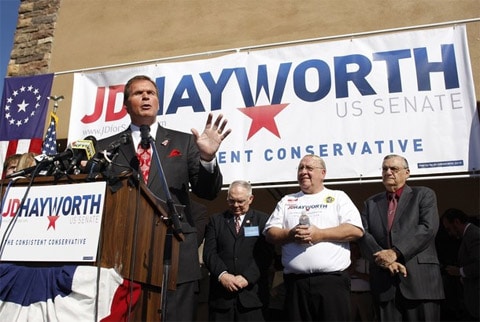 In an interview on Florida's WORL radio station yesterday, Former Arizona congressman JD Hayworth, who is challenging Senator John McCain in Arizona, said that allowing same-sex marriage under some definitions could lead to a man marrying his horse if he really loved it, and the only way to stop it is with a federal marriage amendment.

Said Hayworth: "You see, the Massachusetts Supreme Court, when it started this move toward same-sex marriage, actually defined marriage — now get this — it defined marriage as simply, 'the establishment of intimacy,'. Now how dangerous is that? I mean, I don't mean to be absurd about it, but I guess I can make the point of absurdity with an absurd point — I guess that would mean if you really had affection for your horse, I guess you could marry your horse. It's just the wrong way to go, and the only way to protect the institution of marriage is with that federal marriage amendment that I support."