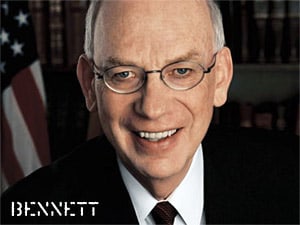 "Sen. Robert S. Bennett (R-Utah) has introduced an amendment (to the health care reform bill) that would suspend the issuance of marriage licenses to same-sex couples (in Washington D.C.) until the issue could be put before voters.

Bennett is emerging as the most stalwart congressional opponent to same-sex marriage in the District. Earlier this month, he sought to attach a similar amendment to a Federal Aviation Administration Reauthorization bill. But that amendment was ruled out of order.

But Senate Democrats, who are trying to keep all GOP amendments off the reconciliation bill, are widely expected to kill Bennett's amendment, which was first reported by the New York Times."

NYT — "Bennett amendment: To protect the Democratic process and the right of the people of the District of Columbia to define marriage. (#3568)"

Check out more of the ridiculous proposed amendments here.