A story about Gareth Thomas, the Wales rugby fullback for the Cardiff Blues who announced he was gay at the end of last year while still an active player in the sport, is featured in the latest issue of Sports Illustrated. A headline on the cover of the magazine aptly describes the rugby player as "The World's Bravest Athlete." 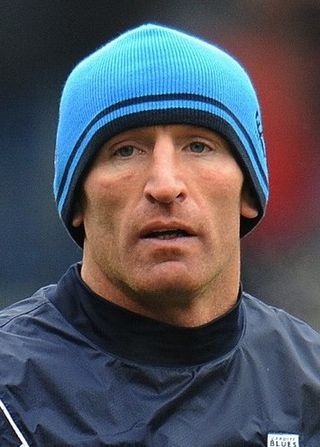 The piece recounts the moment Thomas, whose nickname is "Alf," revealed his sexual orientation to coach Scott Johnson and his teammates in 2006. The conversation began with Johnson asking Thomas the big question point blank:

"Does it have something to do with your sexuality, mate?"

Tears filled Alf's eyes. "You knew all the time," he said.

"So … you're still Alf, right? We love
you. This doesn't change anything about you as a person or how the boys
feel about you…. But you'll need support, mate. You can't hold this
alone. I'm going to speak to a few of the boys. They need to know."

Alf
shuddered, hung his head and nodded, then went to a bar in the team
hotel and waited in terror for two hours. Johnno checked into a room
there, invited in two of the most senior and respected members of the
team, Martyn Williams and Stephen Jones, opened a bottle of red and
poured out the truth.

The two players finally entered the
bar. Williams put a hand on Alf's back. "Hey, mate," he said, "no big
deal. We don't care. Cheers for getting it out. Why didn't you tell us
before?"

Kudos to his team for being so supportive. Wouldn't be just great if a similar scene played out with a professional sports athlete in the United States? And soon?

Previous Post: « Gates Warns Congress Not to Repeal ‘DADT Before He Has Plan
Next Post: Is This Bollywood Actor A Gay Icon? »