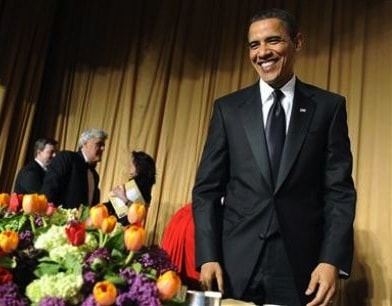 Obama was a hit at last night's White House Correspondents Dinner, managing to throw out quite a few zingers during his speech. He was followed by the night's featured entertainer, Jay Leno, whosevery lackluster bit mentioned DADT, Sarah Palin and Eric Masa's shower encounter with Rahm Emanuel.

The President joked about Leno:

"Though I am glad that the only person whose ratings fell more than mine last year is here tonight. Great to see you Jay. I'm also glad that I'm speaking first. We've all seen what happens when somebody takes the time slot after Leno's."

Watch both of their performances, AFTER THE JUMP.