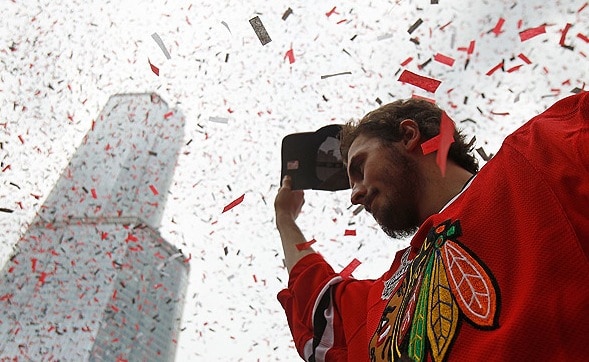 Actually, they want the Stanley Cup as well as the trophy-winners themselves – the Chicago Blackhawks. The city's Pride Parade will take place on June 27. The Chicago Sun-Times lists the progress thus far.

• To wit: At last check, the Chicago Gay Hockey Association was still awaiting a reply to their invite to the Chicago Blackhawks — and the Stanley Cup — to join them at the parade.

• The buckshot: "We're optimistic, but we know the realistic chances of, say, Patrick Sharp or Jonathan Toews joining us for the Pride Parade are slim," said CGHA president Andrew Sobotka.

• The upshot: "But who knows . . . our goal of having some of the players . . . skate alongside of us in the Pride Parade was to really let the Blackhawks know that there is a strong interest in hockey within the gay community," he added.

• The parting shot: "We would be honored to have the Hawks organization show their support by being there," said CGHA member Tony Tiet. The invite is to all the Hawks players, coaches, broadcasters, front office personnel and even the Stanley Cup itself.

CGHA member David Stefanski told sports blog Puck Daddy the following: '"The Blackhawks have never had a float in the pride parade as far as we know,' he said. 'They have a very good opportunity to reach out to a community that they wouldn't reach.'"

The Windy City Times reports that the team has plenty of gay fans who are excited about their win: "On the night of the 'Hawks Stanley Cup win, Clark Street [ in Lakeview ] was full of people celebrating, while a few blocks over, Halsted [ Street ] was almost like a ghost town. The CGHA realized that there are plenty of opportunities for the Hawks to increase their presence in the gay community by being more inclusive.