The Berlin administrative court has ruled against a German man who married his Spanish husband in Canada and sued to have his marriage recognized as such in Germany, the Telegraph reports: 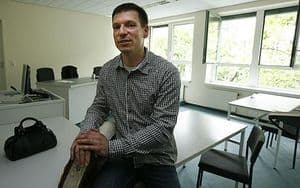 Andreas Boettcher, a 37-year-old German event manager, married his Spanish partner, a dancer and choreographer, in Montreal in July 2006 but when he returned to Germany, he was registered as single because the authorities did not recognise the foreign wedding. Now the local registry office must at least list him as half of a 'registered partnership', the Berlin administrative court found.
'The court agreed with the view of the authorities that he could not be registered as 'married' because a marriage under German law requires different-sex couples,' it said in a statement.
'However the plaintiff could demand registry as a life partner because Canadian gay marriage largely corresponds under German law to a registered partnership.'
The court said the policy would apply to any gay couple lawfully married abroad."

Previous Post: « Watch: Learn to Swear in English
Next Post: Tweets from the Prop 8 Courtroom: Trial Ready to Resume »