Republican Senator Orrin Hatch has clarified a statement he made at a town hall in Utah last week where he said that "gays and lesbians don't pay tithing, their religion is politics."

Offensive? Yep. But according to The Salt Lake Tribune, this is what Hatch really meant by the comment: 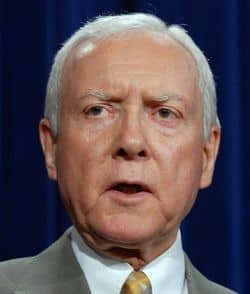 "Many gay people are vociferous Democrats who are willing to pony up money for politics. That's something I admire," Hatch said this week. "I don't know how I could have been much more complimentary the way I said it." The six-term U.S. senator said he was trying to motivate the crowd to be active in politics and was using those groups as examples. He said he wasn't trying to imply that people who are gay aren't religious.

"There are some very, very good gay people who are very religious who undoubtedly pay tithing," Hatch said. "That wasn't what I was talking about. I was talking about politics and praising them for getting involved. I was making the point that they don't just stand on the side, they actually support their Democratic candidates with their money."

Thanks for the compliment, Senator.

Previous Post: « Towleroad Guide to the Tube #675
Next Post: Photo: Gareth Thomas and Nick Youngquest In The Locker Room »