Pastor Josh Noblitt is suffering from bruises and a fractured rib after an evening attack last week by a pack of alleged teenage gay-bashers in Atlanta. One of the attackers is a mere child of 13.

WXIA in Atlanta reports on what happened:

Noblitt and his partner were approached once by a group of teenagers while they were playing cards. Noblitt says the teens asked if they were gay and said they should beat them, but that Noblitt told them to go away and they left. 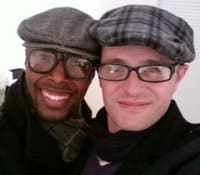 "Fifteen minutes later they came back with a stick and kept asking us if we were gay, 'Two men laying on a blanket together we ought to beat ya'll for that and give us your money'," Noblitt said. "Then they hit us with the stick and I grabbed it away and then we just started fighting at that point."

Noblitt managed to get away and call 911, but he says the teenagers called on their cellphone for back up and that a new group arrived and one of them put a gun to his head and demanded his money.

"While I was on the phone with the 911 operator, a guy came with a gun and pressed it to my forehead while the 911 operator was still on the line and said 'Where's the money?'" Noblitt said.

Six teens were arrested in the assault. Cameras that were supposed to have been installed in the park would have captured images of the suspects but, even though the city received approval and the necessary funds for the job months ago, the work has still not been completed.

"This incident makes me more sad than anything else. It was heartbreaking to learn that one of the people arrested was only 13 years old and the oldest one was only 19. How do young people like this get into a situation where they are robbing and assaulting people in a park? In addition to my work at the church, I also work in the criminal justice system so I am familiar with some of the things that go on in prison. It can be horrible, especially for young people. My heart goes out to their families as they go through this painful process. Maybe someday after this has all played out in the courts I can sit down with them face to face, hear their story, share my story with them and try to find some common ground as fellow human beings. Crime of this kind does not get reduced by locking people up and throwing away the key. It is reduced by building relationships, providing opportunities for young people to engage in positive activities, and teaching kindness and acceptance of people who are different. I hope and pray for restoration from the harm that has been caused not only to me and Trent, but also to the community as a result of this incident."

Watch a news segment about the attack from WXIA AFTER THE JUMP.