Something new on Towleroad…Causes you'd lift a finger for…..If you "Like" Gayle King's show and want to send that message, this is the button for her Facebook Fan Page.

On her radio show Friday, Gayle King acknowledged the nervousness she felt when invited to the September 2008 wedding of Emmy and Tony Award-winning producer, Scott Sanders and Interventionist and author Brad Lamm. But it took only seconds for her bring her listeners along, sharing the news of last weeks ruling that DOMA is unconstitutional by Massachusetts courts. ("I like how they think in Boston.") — and to offer what is I guess her trademark  "Mommie Hug" to the Today show for its inclusiveness. 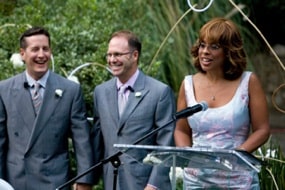 Said King, reacting to the U.S. District Court in Boston's striking down of the Defense of Marriage Act (DOMA) as unconstitutional: "They believe Gay people should be able to be married. I do too. In the world according to Gayle I definitely do."

Sanders, Lamm and King got to know each other through connections to Winfrey. Sanders co-produced The Color Purple musical and Lamm is producing a show for the new Oprah Network.

Listen to King's endorsement of marriage equality, AFTER THE JUMP…