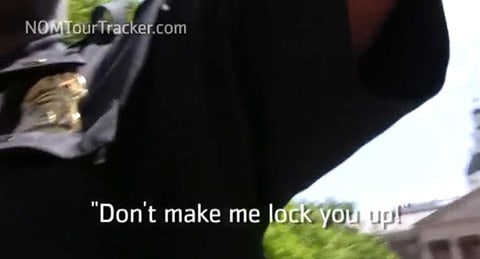 A Courage Campaign videographer was threatened with arrest by Maryland police after attempting to film a National Organization for Marriage rally. The police officer indicated that NOM executive director Brian Brown requested that the videographer be removed from the rally.

"The reason is clear: Brown, President of NOM, was embarrassed by yet another rally event in which attendance was extremely low. On this site, we’ve started calling it the #NOMtourFAIL, in new media parlance.We now have video footage to share of the entire incident, including the moments that led up to it and what happened afterwards when Courage’s Arisha Michelle Hatch attempted asked for an explanation from the police officer.The video speaks for itself, from the moment Brian Brown convenes the extremely small crowd (despite his prediction of “50 (or) 100″ people) to the moment Jethro is threatened with arrest…What Brian Brown did — asking the Maryland police to remove our team from the event — was a violation of our First Amendment right to document the rally in a public space on public property. We hope he doesn’t make the same mistake again. What the officer did — threatening to arrest our videographer — was done because Brian Brown is realizing that transparency is problematic for the future of his anti-gay rights organization. And he’ll do anything to stop us from exposing that reality." 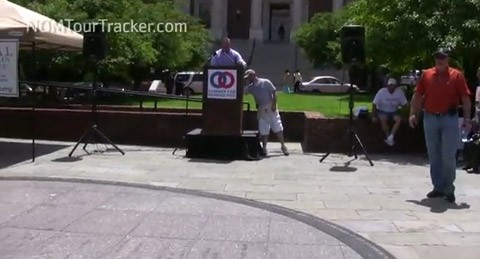