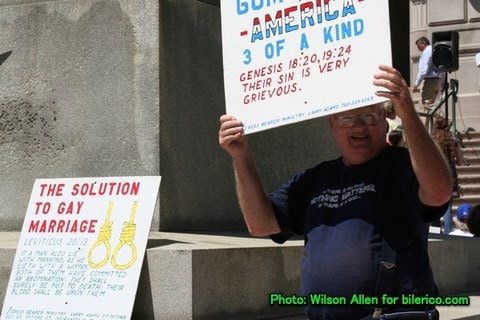 Larry Adams was one of the few who showed up to support the National Organization for Marriage's bigoted message on their hate-a-palooza tour when it stopped in Indianapolis today.

Adams displayed signs with nooses and Leviticus passages, indicated what he considers the "solution" for gay marriage. Bilerico has a report on today's rally.

The Courage Campaign's NOM Tour Tracker interviewed Adams about his views, and it appears that Adams is one of those men who fears his own homosexuality so much that he turns to extreme Biblical measures to ward it off.

Adams says he believes homosexuality is a choice. When asked if he's ever "been tempted by it," he says "Oh, yeah. I knew it was from The Devil so I avoided it."

Watch the interview with Adams, AFTER THE JUMP…

In related news, NOM has apparently diverted its tour from tomorrow's planned stop in Madison, Wisconsin to head to South Bend, Indiana where the City Council is set to vote on an anti-discrimination ordinance that would cover sexual orientation and gender identity. It's a vote that has come up, and been defeated, in the past, so a lot of attention is on it.