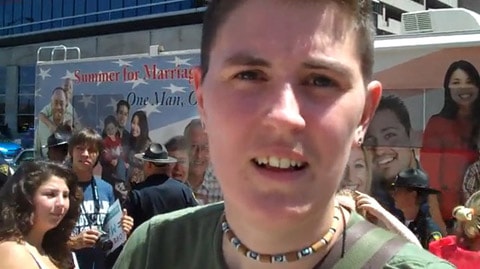 A counter-protester at the National Organization for Marriage's rally in Indianapolis earlier this week says she was "hit in the stomach" by a NOM supporter.

This counter-protester, named Alice, says the pro-equality group there was very peaceful, which is a good thing, because some are saying that the only reason NOM is holding this tour, given its abysmal attendance, is to draw counter-protestors out so they can prove intimidation in their court battles.

NOM isn’t touring the country to tout “traditional marriage.” What they’re really trying to do is attract counter-protesters, in hopes that those counter-protesters – fair-minded people who stand up for equality – will create scenes and be disruptive. They’re doing this so they can pepper ongoing lawsuits challenging public disclosure laws with made-up stories of harassment.

NOM and their allies suffered a tough loss last month when they argued in front of the U.S. Supreme Court that they didn’t have to follow public disclosure laws like everyone else. While rejecting NOM’s request to shield petition signatures on an anti-LGBT equality measure on the Washington state ballot, the Court did allow for re-evaluation in cases of clear intimidation or harassment. That’s where the Summer for Marriage tour comes in. Unable to face reality and admit defeat, NOM wants fair-minded people to harass and intimidate anti-equality protesters at these rallies so they can go back and ask a federal court if they can hide once again.

Said HRC's Fred Sainz: "Let’s add it all up: NOM and its allies are making a last-ditch legal stand in Washington and Maine that they should be specially entitled to hide their political activities, and they’re saying that harassment and intimidation should provide them this cover. At the same time, Brian Brown schedules a series of virtually unattended weekday afternoon events hoping for counter-protests that they can then use as evidence of harassment and intimidation. Why else would NOM execute such half-hearted non-events and then completely subjugate its so-called ‘pro-marriage’ message in favor of devoting its energies almost exclusively to condemning lawful protesters?"

Watch the NOM Tour Tracker with counter-protester Alice, AFTER THE JUMP…