Margaret Hoover, the conservative great-grandaughter of President Herbert Hoover who spoke out in support of marriage equality in January, pens another op-ed for FOX News in the wake of the Prop 8 decision, warning her "fellow conservatives" to let up on the attacks against Judge Walker and rethink their opposition to marriage equality. 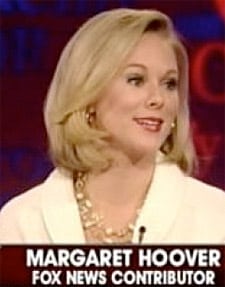 Now, with a decision handed down that social conservatives despise, a judge whose sterling reputation as a conservative for twenty years on the federal bench is under attack.

On this page the day of the verdict, an article by a law professor from Notre Dame posited through conjecture that Judge Vaughn Walker’s rumored homosexuality caused him to decide the trial before hearing it.

Other conservatives howl that one judge is unjustly invalidating the will of seven million Californians and that gay rights should come to the populace through the ballot box, not the courts.

We conservatives have a well-founded narrative about judges and the courts. It is true that the federal bench is populated with liberals who view their role not as interpreting the law as it is written, but as policy makers empowered to sculpt social outcomes with which they agree.

The irony of this case is that Judge Walker is not a liberal activist judge but one whose career has proven him to be a tempered judge, true to the Reagan-Bush conservative jurisprudence that he was nominated to represent on the bench.

Conservatives cannot deny that our Founders intended the judiciary as an equal and independent branch of government purposed to ensure the protection of every citizen’s rights.

The Supreme Court has previously ruled that the right to marry is a fundamental constitutional right.

When an unpopular minority is denied the right to marry, it is indeed the role of the courts to protect the rights of that minority, especially when a majority would deny them. This is why Judge Walker’s opinion reads, “That the majority of California voters supported Proposition 8 is irrelevant, as fundamental rights may not be submitted to [a] vote; they depend on the outcome of no elections.”