Mary Cheney, who has two children with her partner Heather Poe, is fighting against the rights of gay people and their families with her campaign contributions, Raw Story reports: 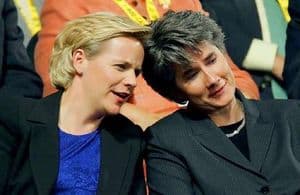 "Cheney gave $500 on April 1 to Kelly Ayotte, a Republican 2010 Senate candidate from New Hampshire, according to the election records database Newsmeat. Ayotte is seeking to fill the seat of retiring GOP Sen. Judd Gregg.

Ayotte told the Concord Monitor last August that she is 'against same-sex marriage and believes marriage is between a man and a woman,'Donates to Senate  the paper reported.

The New Hampshire news station WMUR 9 also notes Ayotte opposes same-sex marriage. 'Support traditional marriage,' reads her stance on the issue, as defined by 'one man, one woman.' Three of the other four Republican hopefuls have expressed similar views."