The American Foundation for Equal Rights, who represented the plaintiffs in the Prop 8 trial, filed the motion yesterday, the day it was due. 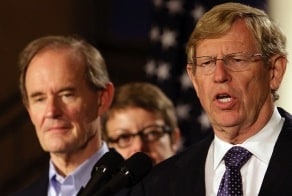 AFER issued the following statement calling for same-sex marriages in California to resume at once.

“The unconstitutionality of Proposition 8 has been proven beyond a doubt. Extending Prop. 8’s denial of fundamental constitutional rights represents a grave injustice. The time for the court’s ruling to go into effect is now. We welcome Governor Schwarzenegger’s and Attorney General Brown’s opposition of a stay after their thoughtful analysis of the evidence, the court’s ruling and the law.”

The National Center for Lesbian Rights has published an explanation on the possible ways the stay could potentially play out:

"Judge Walker can decide whether to stay the decision for longer at any time. If he grants the motion to stay, same-sex couples will not be able to marry in California until after the appeal is finished. The Judge can also delay the decision for a short time until the Ninth Circuit appeals court decides whether they will order a stay. If Judge Walker denies the stay and permits his decision to take immediate effect, the Yes on 8 proponents can ask the Ninth Circuit appeals court to order an emergency stay. Several counties have announced that, if Judge Walker lifts the stay, they are ready to begin issuing licenses and performing civil ceremonies for same-sex couples."

Meanwhile, David Boies, one half of the team who repped the prop 8 plaintiffs, told a large crowd in San Francisco that he believes it is a "dead certainty" the case will end up in the hands of the US Supreme Court. Watch a clip of him speak, AFTER THE JUMP.

Finally, Equality California is calling on everyone to sign their electronic petition that urges Meg Whitman and Steve Cooley, who are running for the CA governorship and AG positions respectively, to state that they will refuse to defend Prop 8 in court if they are ever elected.