SP: What's your relationship today like with your former teammates? Have any of them ended the friendship because of your sexuality?

SP: Have you ever had any kind of romantic relationship with a player in the NBA?

JA: Not romantic, no.

SP: Since there's much homophobia in pro basketball, were you surprised to see Isiah Thomas and his son pose for the NOH8 Campaign? 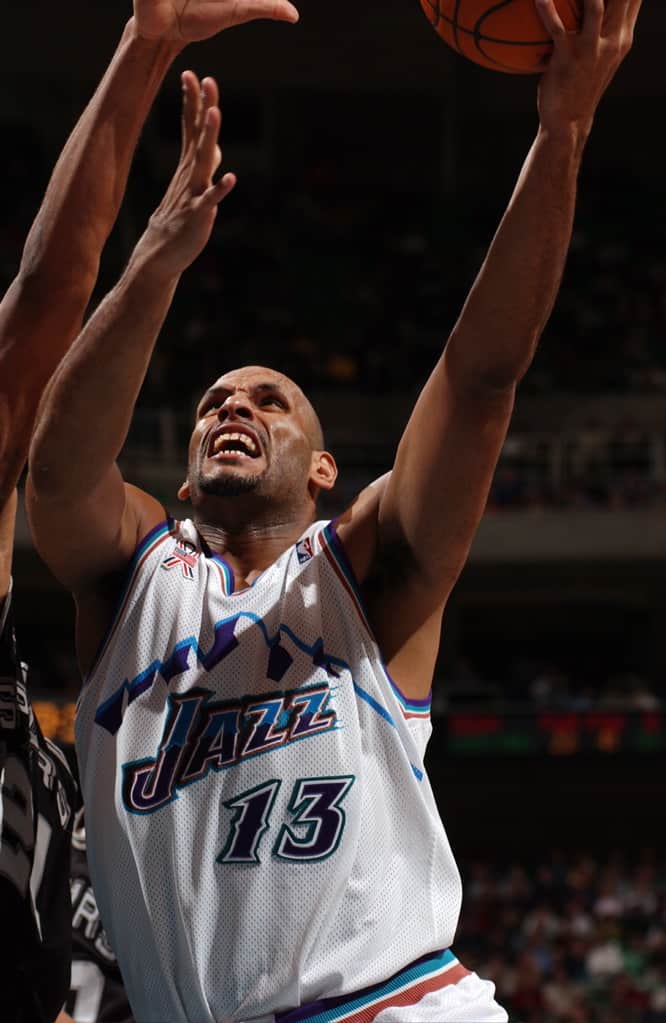 JA: I am not surprised, but pleased, I can’t say that Isaiah would be the person I thought of first! I thought maybe Grant Hill or Charles Barkley, but Isaiah and son have done a really positive thing.

SP: You revealed that spotting Ian McKellan at a gay pride parade in Manchester spurred you to come out publicly. Have you spoken to him about the effect he had on you?

JA: Oh yes….we did an event together and I turned into a blubbering, ineloquent idiot, telling such an intimate story to, essentially, a stranger… we have become friends since then, so I hope he doesn’t hold that first blub against me.

SP: How did it feel to recently shoot the first ever basket at the Olympic arena to be used in the 2012 games in London?

JA: Painful. I had just come off back surgery (two laminectomies and four discectomies) and was promised that I wouldn’t have to do anything more than shoot! But I have to say it was great to christen the new space and really great that my being gay was not even a part of any of the discussion as to whether I should or shouldn’t open the gym. That day and the recent gay games have made me want to play again – next gay games!

SP: Have any young people shared their own personal stories with you? If so, what has that been like for you?

JA: I cherish the moments when young people choose to share their stories. It feels to me like the most important thing a person can do is to listen to people when they feel able to tell you about their ideas, thoughts and aspirations. Interestingly, it isn’t just LGBT people who seem to feel their lives resonate with mine, but whether by email or in person, it is hands down the best part of being me.

SP: You went back to school to get your Ph.D in psychology because, as you put it, you wanted "to do something more meaningful in (your) life." Has it given you that feeling of meaningfulness?

JA: Absolutely, I feel like the sum of my experiences in addition to the academic backing makes me better able to work with my clients, people in general and take part in the debate on human rights. Along with my day job, I teach now, I work with the government to produce "white papers” (policy influencing documents) and speak at conferences. These academic aspects increase the opportunities to influence people and expand the human rights agenda. Frankly, I am also a total geek, so it just fits.

SP: You were the Gay Games Ambassador in Cologne this year. What was that experience like for you?

JA: Originally, not much, just a responsible thing to do. My experience at the gay games this year was. however, revelatory. I met the scholarship athletes who had been sponsored by the FGG to come to the games, from South Africa, Peru, Mexico, all over Eastern Europe, I heard their stories of oppression, derision, marginalisation and all to often physical abuse and intimidation. It was humbling to hear about their daily, struggle and it put "the plight" of gay, professional athletes in the west into perspective. I never had it so tough.

Also, I spend very little time around gay people in my daily work life. Most of my gay friends are dotted around the States and I have seen them infrequently in the last year, but being in Cologne around athletes who take sport as seriously as I once did, made me feel a great regret that my experience playing basketball wasn’t as rich as theirs clearly is now. I met many of the English football teams while there and am hoping they will adopt me, they were a blast to hang out with…I have made several resolutions since being at the gay games: to play more basketball, find a gay team to play with from time to time (not my own club, that just feels weird) and spend more time with my current friends and making new ones. 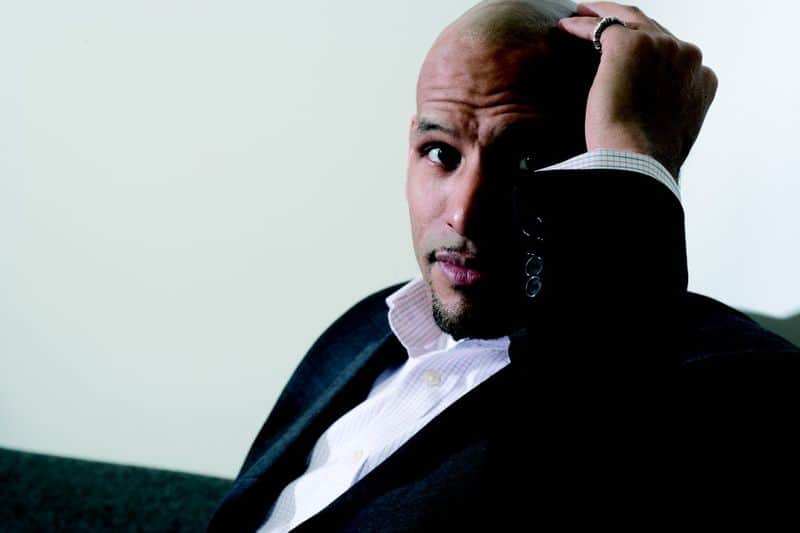 Former NBA player John Amaechi was the first pro player in that league to come out as an openly gay man. He chatted with me recently about being an openly gay athlete, his newfound friendship with Ian McKellen as well as his involvement in this year's Gay Games.

SP: Now that it's been a few years, how does it feel to be the first NBA player to publicly come out of the closet?

JA: I have to be honest that I rarely think of that aspect, not because it was a bad experience – in fact, it was resoundingly the opposite, but I try to stay in the moment and now the issues facing the LGBT community feel so much bigger than any one professional athlete. On reflection, and in talking to people from workplaces and schools in parts of the US, parts of Africa and Eastern Europe, that I have spoken to in the last few years, I had it easy.

SP: A study in the UK found that the majority of soccer fans in that country are ready to support an openly gay player. How close do you think basketball fans in the US are to feeling that way?

JA: I have to tell you that the geek in me looked at that survey and it is really lacking in a number of the reliability and validity aspects you need in really good research. That being said, I do agree that the open-mindedness and general acceptance of difference (especially LGBT) in the UK is better than ever before, even amongst fans. I think that many fans in the US already feel that way, and are simply “waiting” to be explicitly told it’s ok to lose the machismo, bullshit, “no homo" attitude, by enough people in authority, including current straight players, owners, etc. However, America is different from the UK in that you still suffer from people actively creating and maintaining anti-LGBT laws, and that informs the attitudes of fans: "if gays are banned from adopting in my state there must be something wrong with them, right?”

SP: You recently told the Manchester Evening News: “I get into trouble sometimes with the gay community by saying it is not the job of sports stars in the closet to come out. That is not how change happens. For an under-prepared and psychologically stunted individual who plays sports at a high level to come out before they are ready is like being born prematurely.” At what point do you think a sports star is ready to come out?

JA: I think there are probably 5,000 mainstream professional athletes in the US, maybe 500 of them are LGBT, I just don’t think that is a key demographic in the quest for change. Some are “stunted” as I mentioned – not as many as I made out in that article in fairness – but I think it is a just a plot device we like to have in our mind that if a big enough star came out the fans would stop being homophobic, the family research council would rethink it’s policies and all would be well.

I was in Cologne for the gay games and I spoke to person after person – all from southern or central states in fairness – who were not out at work: high school teachers (a LOT of teachers) , several IT technicians, two journalists, a TV production person and others… all of whom felt it dangerous in one way or another for them to be out at work – all of whom said that gay athletes should come out even though they felt they couldn’t. When all teachers, engineers, etc, etc feel safe to come out, maybe then the argument for professional athletes to do the same would not ring with so much hypocrisy. A gay sportsman coming out just isn’t going to have the impact you think. Young people are mostly already won over in terms of LGBT human rights, and those with the real power, aren’t going to be swayed by an athlete, because they aren’t swayed by the hate crimes statistics, they aren’t swayed by the genuine love of gay couples and they aren’t swayed by the logical argument for equality.

SP: How close to you think we are to having an an active, openly gay player in the NBA?

JA: One could be outed at any second, but not close otherwise. Also, we should note that lots of professional athletes are out in the same way that many in the LGBT community are out. They are out to family and/or close friends, to some of their team mates and coaches, but not to the universe – they are no more “In the closet than the numerous (a majority?) of LGBT people on-line whose profile obscures their face and says “out to everyone except family” or “not out at work."

Read the rest of the interview, AFTER THE JUMP.