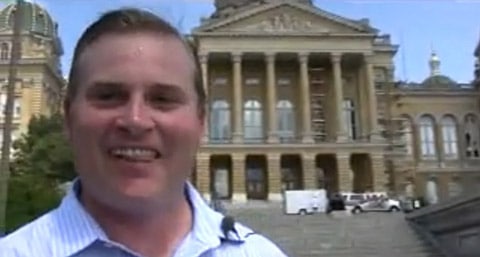 "For those of you who followed the Perry v. Schwarzenegger proceedings, you probably recall David Blankenhorn, a supposed 'expert' witness for the defense (anti-equality) side who was backed into a corner by plaintiff co-counsel David Boies. Blankenhorn was forced to respond to assertions made in his book on how the freedom to marry would mean many more same-sex couples would enter into committed relationships, their children would benefit, would increase the worth and validity of same-sex relationships, would decrease the number of gay/lesbian individuals who unhappily marry someone of the opposite sex, etc. Blankenhorn was forced to affirm his belief in these statements and many more, to the embarrassment of the defense."

NOM Executive Director Brian Brown, in this new interview from Des Moines, Iowa, refuses to fall into Boies' Blankenhorn trap by evading all questions about a hypothetical world in which same-sex marriage is legal.