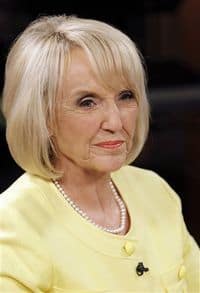 In an interview with the AP published this morning, Jan Brewer finally concedes that she was wrong about a claim that headless bodies were turning up in the Arizona-Mexico desert.

From the AP piece:

"'That was an error, if I said that,' the Republican told The Associated Press on Friday. 'I misspoke, but you know, let me be clear, I am concerned about the border region because it continues to be reported in Mexico that there's a lot of violence going on and we don't want that going into Arizona.'"

"She said she was referring to beheadings and other cartel-related violence in Mexico in comments she made earlier this summer about decapitated bodies found in the state's southern region."

Guess she realized that she couldn't run away form the question forever.

Watch her original comments about the beheadings from earlier this summer, AFTER THE JUMP.