Cathedral High School in Springfield, Massachusetts forced out the school's athletic director after she married her female partner in August, The Republican reports: 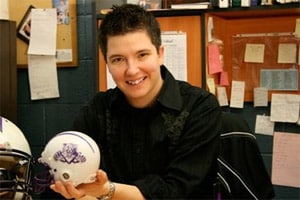 "Christine M. Judd, who served as athletic director and dean of students, said she is no longer an employee of the Roman Catholic Diocese of Springfield school system after a meeting Wednesday with administrators of the Catholic high school. The diocese listed her departure as a resignation, but Judd said she is still exploring her legal options. 'I was given a choice of termination or resignation,' Judd said. 'I’m hurt, but I wish nothing but the best for Cathedral, its students, the parents, the athletic teams, administration and faculty. I bleed purple (the school’s color).' Judd, a Springfield resident, worked for the Catholic school for 12 years, beginning as a science teacher in 1998. She became dean of students six years ago and was given the added duties of athletic director three years ago."

Judd pointed out the hypocrisy she believes exists at the diocese: "Judd said she questions if there are lay persons who work for the Catholic diocese who divorce and remarry without an annulment, or employees who use birth control, or men who have had vasectomies, or individuals who are pro-choice on abortion. "

Said Judd: "I was hoping that my loyalty, my professionalism the last 12 years would supersede the current hypocrisy that has already been shown with the Diocese of Springfield."