Surprisingly, Boston Legal raises a few complicated and interesting questions here. Legal recognition of intimate privacy and legal recognition of non-procreative unions are the two precedential pillars supporting the infrastructure of marriage equality in the courts.

The Supreme Court's seminal decision in Lawrence v. Texas stood on the shoulders of a so-called right to privacy in intimate situations derived from cases like Griswold v. Connecticut, which overturned a contraception ban by saying that married people should be able to do what they want in the "marital bedroom"; Eisenstadt v. Baird, which said the right to make decisions about sexual conduct extended to unmarried couples who ran afoul of contraception bans; Roe v. Wade, which made sure an individual women could make her own decisions about her sexual and procreative destiny.

And, as Justice Kennedy stated in Lawrence, "individual decisions by married persons, concerning the intimacies of their physical relationship, even when not intended to produce offspring, are a form of 'liberty' protected by the Due Process Clause of the Fourteenth Amendment." A liberty that has been extended to unmarried persons, as well.

So, why did the fictional gay community in Boston Legal have its knickers in a twist?

Because the Shatner-Spader wedding is a sham. At its core, it's a way to stop the government from taking a huge chunk of Shatner's estate. It makes us uncomfortable because this is not what we had in mind. Those of us who advocate on behalf of marriage equality do so in the language of love and equality. But sometimes we fail to realize that those values are not joined at the hip. Sometimes, treating people equally requires us to eschew other deeply held values, like when the ACLU supports the Westboro Baptist Church's First Amendment right to spout hate at military funerals. We may want to bathe in Purell when we're done, but we still dive into the mud.

By the way, here's how the judge, played by the underused Roma Maffia, decided this case:

Judge: I do find this union to be primarily based on money. I also agree with Mr. Pinard. This is exactly the kind of exploitation that the Christian Right and others feared. But I also recognize that people marry for all sorts of reasons. It's not the government's place to ask why. Mr. [McGarry],   there are many gays to marry heterosexuals, also gays to marry gays of the opposite sex because they want to start a family, be co-parents. Nothing to do with romantic love. I hardly think you think the government should step in and stop that. Same-sex unions are legal in Massachusetts. Your motion for an injunction is denied." 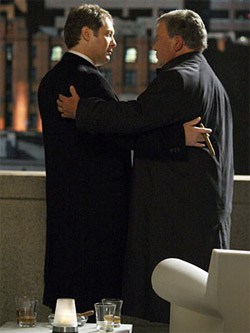 Boston Legal was never appointment television for me. The cast was all-star — James Spader, John Larroquette, Candice Bergen and even the inimitable William Shatner — but the writing was no-star. It was kitchy, too cute by half and way too legal for someone who was billing 2500 hours that year.

But my mom likes it. Last week, while likely trying to avoid talking to my father, she stumbled across the series' last episode on whatever channel 9 is in central New Jersey.

"Last Call" saw Shatner's law firm and brain falling apart. To save the law firm, he sold it to the Chinese; to save his brain from Alzheimer's, he wanted to do two things: Take an experimental drug not approved by the FDA and marry his best friend and business partner, Alan Shore (James Spader), to ensure that Shatner's assets would be in good hands (no pun intended).

Two heterosexual men getting married to each other? Scandalous!

Candice Bergen didn't like their "scheme", saying, "It's a sham. … It is no different than two people who aren't really in love with each other marrying for a green card."

Really? But, as Spader said, "I love Denny, I believe he loves me, and there's no requirement that a couple be 'in love.'"

The clerk at Boston Municipal Court didn't like this, either. She — played by an actor who often plays minor lesbian characters, but is not a lesbian herself — notified the local gay and lesbian advocacy organization, which promptly asked for an injunction to prevent the Crane-Shore wedding.  Here's what happened (my transcription):

Judge: So basically, this marriage is all about money.
Spader: Judge, I would guess a lot of marriages are. If you trace the institution to its origins, you'll discover that marriage had its roots in economics. Not love, money.
Chris McGarry (representing the gay rights organization and who recently showed up on a Mad Men episode): I find it offensive.
Spader: Why?
McGarry: I'll tell you why. Speaking as a gay man, we have had to fight long and hard for this right.  We have suffered ridicule, hatred, gay bashing…
Spader: You're preaching to the All-Boys' Choir. We're with you on all that.
McGarry: No you're not. You're making a mockery of it.
Spader: We're doing no such thing.
McGarry: You're blatant heterosexuals.
Spader: So what? Are you proposing a rule that every couple be sexually active or procreational because that one's been used against you.
McGarry: Your Honor, this is exactly what the religious right and conservative movements have been warning of: If we allow same-sex marriage, what next? Well, this is what's next. You will see people exploiting same-sex unions to circumvent…
McGarry: You hypocrite.
Judge: Alright.
McGarry: He's suggesting we go into some kind of discovery as to why two people want to marry. The very kind of invasive…
Judge: It does seem a bit cynical. You are basically wanting to marry Denny Crane (Shatner's character) to skirt tax laws.
Spader: Your Honor, in this day and age, the preservation of wealth is paramount, and I'm sorry, but before I see Mr. Crane's money go to fund immoral wars or less moral government bailouts, I'd rather see it go to me. The plans I have for it are far more philanthropic. And, by the way (to Pinnard), I love him. I love the man. He loves me. We're partners. To say that we cannot get married because we don't have sex is just as preposterous and bigoted as banning marriage based on who a person chooses to have sex with.
McGarry: You will be fueling a fire to pass a constitutional amendment to ban gay marriage…
Spader: You're the one stoking the embers. For what it's worth, this isn't just about money. There are medical reasons. He happens to be suffering from an incurable illness…
McGarry: You can do that by proxy.
Spader: He doesn't want to. He wants a partner. A legal spouse.
McGarry: Why?
Spader: That's his prerogative. His privacy. You seek to invade that too?

How should the judge decide? And why?

Continue reading "You Want to Get Married, Too?" AFTER THE JUMP…