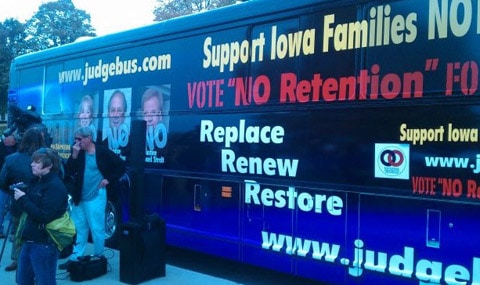 Last week I wrote a lengthy post on the new hate-a-palooza bus tour in Iowa, meant to drive up support for the campaign to oust state Supreme Court justices who approved marriage equality, and sponsored by a coalition of anti-gay hate groups like NOM and the AFA.

NOM's Brian Brown tweeted the photo above of the bus at its first stop, revved up and ready to hate.

The WaPo covers the kick-off:

At a Statehouse rally Monday to kick off a bus tour, gay marriage opponents pleaded their case for why voters on Nov. 2 should opt not to retain Chief Justice Marsha Ternus, and justices David Baker and Michael Streit. Iowa voters have never ousted a state Supreme Court justice.

"I can't overstate the significance of what is about to happen in Iowa," said Brian Brown, executive director of the Washington, D.C.-based National Organization for Marriage. "The whole country is looking at you. This cannot be overstated."

At a counter rally about 100 yards away, organizers argued that anti-gay rights groups that have been spent more than $600,000 to oust the justices are only focused on the one issue and don't care about the damage they'll do to the state's judicial appointment process.

"We are going to send a message all the way across America. These judges are rogue judges and they're arrogant," Iowa Republican Rep. Steve King told the crowd Monday, standing in front of a bus emblazoned with the justices faces with the word "No," superimposed on them.

The campaign is well-funded: "Thus far, the campaign to remove the justices has spent more than $650,000 and those who want to retain them have spent $227,000, much of it on television ads. The National Organization for Marriage has been the biggest spender, contributing $435,000 to efforts to remove the judges. About $100,000 has come from the AFA Action Inc., the political arm of the Mississippi-based American Family Association. The Campaign for Working Families, a Washington-based group, also spent $100,000, and the Washington-based Family Research Council added $18,000. The Iowa-based Iowa Family Policy Center has spent roughly $10,000."

The Courage Campaign, which is tracking the bus tour like they did NOM's previous hate-a-palooza tour, reports that the turn-out for the haters is already pathetic.

Another group, Fair Courts for Us, is holding a series of press conferences and events around the state meant to counter the Judge Bus' hateful message.